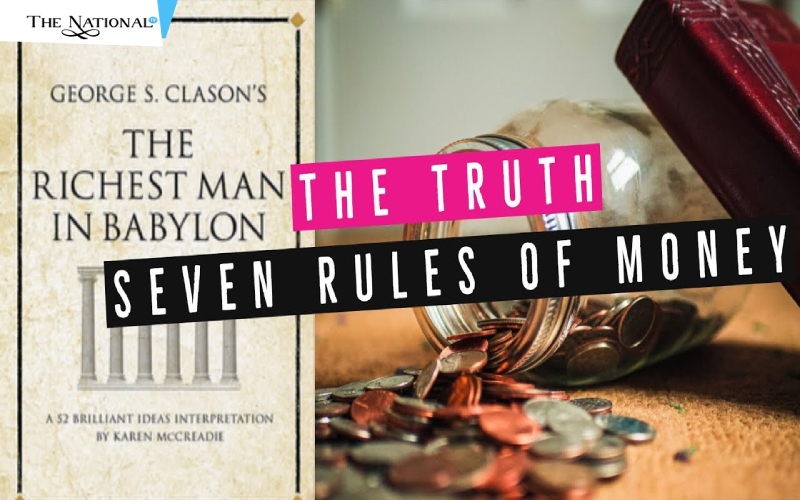 Lo, Money is Plentiful for those who understand the simple Rules of its Acquisition. George S. Clason Author of "The Richest Man in Babylon" Babylon is the richest city of ancient times. In the pages of history, there lives no city more glamorous than Babylon. Located beside the Euphrates River, it stood as an epitome of men's power to amass richness. As a city, Baylon exists no more. But the vision and knowledge of people who lived in Babylon were interpreted from clay tablets excavated from the ruins of the city. Alfred. H. Shrewsbury, Professor of Archaeology department transcripted the texts on these tablets to find the story of a man named Dabasir who lived more than 8000 years ago.

The tablets revealed the rules that Dabasir followed to get himself out of debt into richness. Shrewsbury himself decided to test these ancient rules as he was also facing a financial crisis. Do those ancient rules withstood the test of time and gave financial freedom to Shrewsbury?? The answer is yes. He wrote a letter regarding how these rules of Dabasir liberated him from debts and paved the way to richness. The rules of Dabasir represents the rules followed by the people of Babylon. And no wonder Babylon became the richest city of time immemorial.

These are the rules engraved on those clay tablets many thousands of years ago:-

1) Save a part of your earnings Keep one-tenth of your income to yourselves. No matter what, keep expenses to the rest of the income.

2) Control expenditure Cut unnecessary expenditures like subscription boxes, designer dresses, and other luxury brands. All these goals can wait until you get really rich.

3) Multiply the money you saved earlier The one-tenth of the income you saved every month is put to work. It needs to be multiplied by investing in banks or giving loans. Let the money do work for you and bring back more money. In the Babylon era, there were no banks, but money lending was their way to amass wealth. They get back interest along with the original amount.

4) Protect money from loss While investing make sure you invest in trusted institutions. Lend money to those who have the potential to repay.

5) Make a profitable dwelling investment Your own home is an asset. Hence invest in building a house. Your small investments pave the way in fulfilling this dream in a long run.

6) Ensure a future income When you retire, you must have the income to support the family. A pension was not the way in Babylon times. Hence they bought land and buildings as their value remains intact. Does it resemble today's Real-estate business? Also, Babylon people entrusted coins to money lenders to repay them in interest. A very similar practice of depositing money in the bank as FD.

7) Increase the ability to earn can be increased from learning a skill. If you know a skill, be well versed in that skill. The more you know, the more you get paid. Having a job and being committed to it was regarded as noble in Babylon times. This is true in modern times also. Get more specialized in profession and money will flow to you. Money follows the one who knows and follows its rules. God Speed.