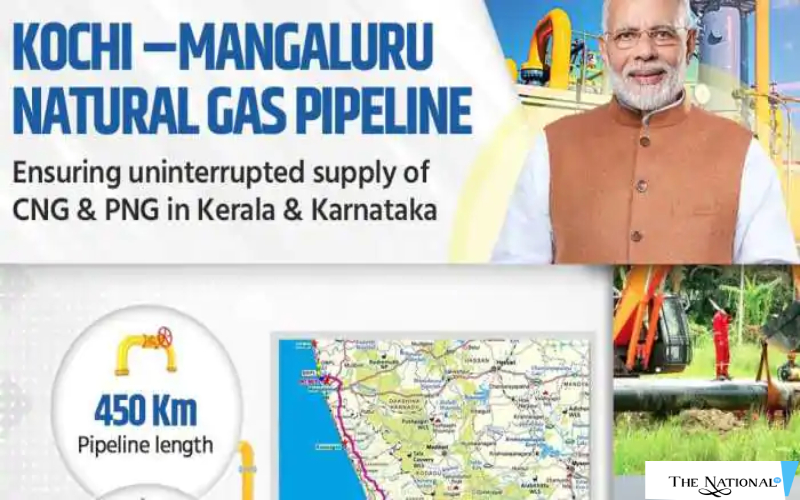 Prime Minister Narendra Modi on Tuesday said that as part of efforts to make India a natural gas-based economy, 10,000 more CNG (compressed natural gas) stations would be opened, and several lakh PNG (piped natural gas) household connections given in the coming days. Inaugurating the 450­km Kochi Koottanad Mangalore LNG (liquefied natural gas) pipeline through video conferencing on Tuesday, Mr. Modi said the facility was part of his government’s “one nation, one gas grid” policy. The government has a concrete plan to move towards a gas-based economy that would be cheaper, convenient, and environmentally friendly, he said.

The Prime Minister said the government would make substantial investments in the coal and gas sectors. The plan was to increase the share of natural gas in the energy sector from the present 6% to 15% by 2030. Energy Supply Sufficient Mr. Modi said the government had definite plans for the future to make the country energy client and reduce expenditure on the foreign exchange through diversification of energy requirements. The focus was being given on increasing production of ethanol to increase its content in petrol to 20% from the present 5%. The world’s largest hybrid energy plant (wind and solar) was coming up in Gujarat. The electric mobility sector too was being encouraged. Through these, alternative, cheap and pollution-free fuel and energy would be made available to people, he said. Giving out statistics on efforts to boost the alternative energy sector, Mr. Modi said while 15,000 km of LNG pipeline was laid between 1978 (when the first inter­State pipeline was commissioned) and 2014, work on 16,000 km that started in 2014 would be completed in the next four years.

As against 900 CNG stations between 1992 and 2014, 1,500 new stations were built thereafter and the numbers would increase to 10,000 soon. As against 25 lakh PNG connections till 2014, 72 lakh PNG connections were given to date.  The Kochi Mangalore pipeline would provide another 21 lakh PNG connections. Union Minister for Petroleum and Natural Gas Dharmendra Pradhan, in his introductory address, said the new pipeline would have international importance, wherein the carbon footprint would get substantially reduced. Stating it was a classic example of cooperative federalism, Mr. Pradhan congratulated Kerala and the Karnataka governments for their support. Kerala Governor Arif Mohammed Khan, Karnataka Governor Vajubhai Vala, Kerala Chief Minister Pinarayi Vijayan, Karnataka Chief Minister B.S. Yediyurappa, Union Minister for Coal and Parliamentary Affairs Pralhad Joshi, Minister of State for External Affairs V. Muraleedharan, and others were present.