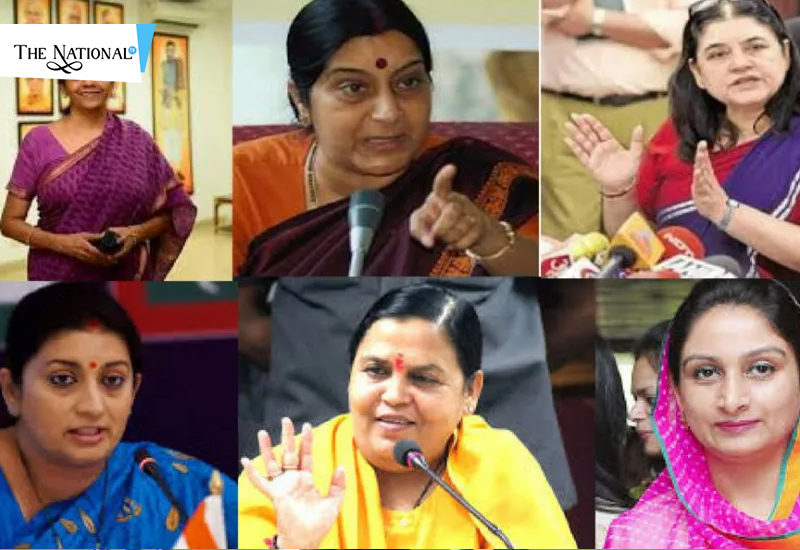 The 2019 Indian general election was held in seven phases from 11 April to 19 May 2019 to constitute the 17th Lok Sabha. The Bharatiya Janata Party won 303 seats out of 543. It will be second term for Mr. Narender Modi  as a Prime Minister. Including Prime Minister , 57 other Ministers took oath ,30 May 2019. Six women were also picked in new cabinet and play important rolls in new government.

Nirmla Sitaraman appointed as finance minister and see is India’s first women full time finance minister.Nirmala Sitharaman joined the BJP in 2008 . She has proficiency in dialog, so gave him responsibility to spokesperson for the party. In 2014, she was inducted into Narendra Modi's cabinet as a junior minister and in June 2014. After that she was elected as a Rajya Sabha Member from Andhra Pradesh. September 2017, she was appointed as Minister of Defence,being second woman after Indira Gandhi to hold the post. Finally,31 May 2019, Nirmala Sitharaman was appointed as the finance and corporate affairs minister.

She is the Union Cabinet Minister of Food Processing in the Indian Government.Harsimrat started her political career, Shiromani Akali Dal regional party of Punjab allying with BJP, with the Loksabha election in 2009 from Bathinda Lok Sabha seat . She was defeating Indian National Congress candidate Raninder Singh with huge margin. “Nanhi Chhan" a project to save girls child she being part of a it. Kaur has been re-elected from Bathinda in 2014 and this time defeated Indian National Congress-People's Party of Punjab joint candidate, Manpreet Singh Badal. After this win,she has been appointed in the Modi government as State Minister for Food Processing.Now she got elected for 3rd from Bathinda in 2019 Lok Sabha election. She defeated the Congress candidate Amrinder Singh Raja Waring in a close fight with around 21000 votes.

She is a  politician, former model, television actress, and producer, but we now focus which thing that she is Minister in the Union Cabinet of India,Minister of Textile. She is member of Parliament from Amethi, won Loksabha elections in 2019 from Congress President Rahul Gandhi. Irani already contested the 2014 general elections against Rahul Gandhi but Irani lost to Gandhi. Irani joined the Bharatiya Janata Party in 2003.She became the vice-president of the Maharashtra Youth Wing in before Maharashtra Assembly’s polls. She was executive member of the central committee of the BJP.

Niranjan Jyoti is an Indian politician belonging to Bharatiya Janata Party (BJP). She was appointed Minister of state in the Ministry of Rural Development in the Narendra Modi 2019 Cabinet.1988 , she was Member of Kendriya Margdarshan Mandal of BJP and play roll in Ram Janmabhoomi Movement.2003, she became Member of Union Executive of party. 2012 she serve as Vice-President of BJP.

Renuka Singh is an Indian politician from  Bharatiya Janata Party and belongs to Chattisgarh .She is  Lok Sabha MP from Sarguja and current Minister of State of Ministry of Tribal Affairs in Narendra Modi's ministry.Renuka was first elected to Chhattisgarh Legislative Assembly in 2003 and became Minister of State of Woman and Child development and Family welfare in Government of Chhattisgarh, In 2008 she was elected again.

Debasree was elected to the Lok Sabha from Raiganj, West Bengal in the Indian general election, 2019 as a member of the Bharatiya Janata Party. Chaudhury became Minister of State for Women and Child Development.Debasree Chaudhuri was introduced to politics during her college days. She has worked in the BJP's youth wing and women's front for many years in West Bengal. Chaudhuri did not win both the previous elections she contested. She stood from the Burdwan-Durgapur Lok Sabha constituency but finished third in 2014. In 2016, she contested in the Assembly elections, which again was an unsuccessful attempt.