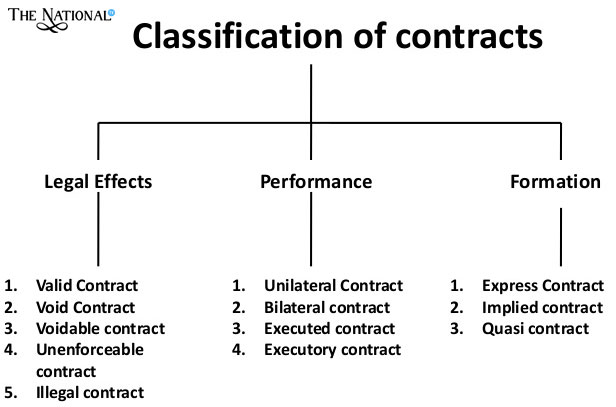 The contract has been defined under Sec 2(h) of the Indian Contract Act, 1872 as an agreement that is enforceable by law. The contract is basically categorized on the basis of validity, formation, and performance.

Contract on the basis of validity -

1. Valid Contract Valid contract is simply explained as those agreements which can be enforceable by law. Basically it fulfills the basic requirements or elements of the contract.

2. Void Contract Void Contract is those Contract which isn't enforceable in the court of law and hasn't fulfilled the elements of a contract. Mohori Bibee v. Dharmodas Ghose It was held that minor is not competent to contract therefore the contract with minor is void and he won't be liable to perform his duty mentioned in the Contract.

3. Voidable Contract It means when the party to the contract has the choice to declare the void in the court of law. It happens when the consent of the parties isn't free and caused by coercion, undue influence, fraud, misrepresentation, and mistake. Chikham Amiraju v. Chikham Seshamma In this case the consent was taken by the threat of suicide for properties. It was held that the threat of suicide amounts to coercion and therefore, the consent of the parties isn't free, and hence it is a voidable contract.

4. Illegal Contract Illegal Contracts are those contracts that are forbidden by the law and the parties are not allowed to form the Contract over such matters. Eg - Contract for the sale of narcotics.

5. Unenforceable Contract It is the contact whose substance is good and valid but due to some technical defect or any other issue they can't be enforced and damages can't be claimed. Eg - If A agreed to buy 20 kgs of wheat for 80,000 then this Unenforceable contract.

Contract on the basis of formation -

1. Express Contract This type of contract is expressed clearly in written or oral.

2. Implied Contract Implied contracts are constituted by the implication of law or action. Eg - Relationship between Doctor and patient.

Contract on the basis of performance -

1. Executed Contract When the performance of the contract has been done or performed then it is considered as an executed contract.