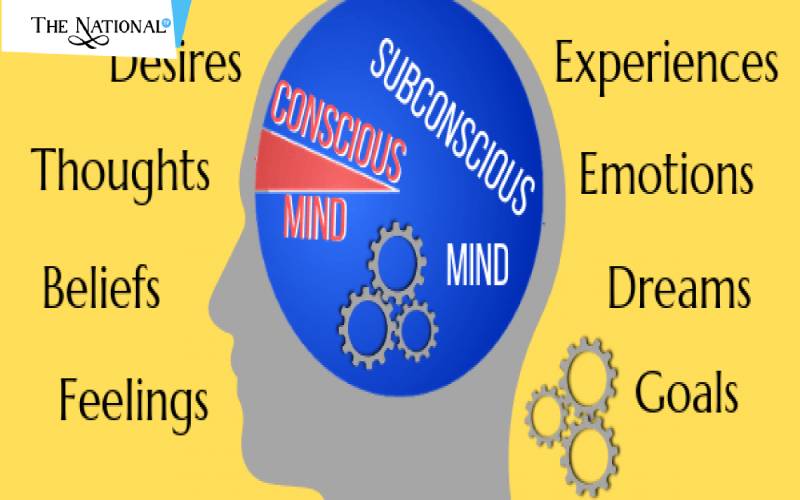 How the subconscious mind works The mechanism of the work of the subconscious mind of a person is somewhat similar to the mechanism of work of computer programs, and if a person wants the program to give him specific outputs, the programmer must set the program correctly in order to obtain the desired results. There are computer inputs through which the programmer enters the necessary data, and computer inputs: the mouse, the keyboard, and the scanner, as for the results, they are obtained through the outputs, namely: the screen and the printer. If the programmer makes a mistake during the programming process, it will happen This is represented by the appearance of strange symbols and words that are not understood or heard an abnormal sound when executing the program, and then the programmer will try to discover the error to correct it.

By analogy with the subconscious mind, the programmer is the conscious mind, and the human inputs are the five senses. As for the outputs, they are the behavior, views, and actions of the person, and the conscious mind gives orders to the subconscious mind, and if there is an imbalance in the behavior of the person with those around him, or other things are observed on him, such as Anxiety, tension, or excessive nervousness, the conscious mind must change the beliefs that caused such behavior. Since childhood, a person has hidden thoughts and feelings that are difficult for him to express to those around him, and this is called repression, which is a group of forces that prevent pent-up feelings from reaching the conscious mind, so they collect and store them in the subconscious, and these pent-up feelings may be aggressive, or feelings Hatred towards certain people, or feelings of shame or fear, which may be sexual motives, which may lead to the generation of problems that are difficult to treat in the future, such as depression, or increased anxiety and tension, and it is possible that the person becomes difficult to adapt to his surrounding environment, all of which affects negatively On the human personality.

And in order to avoid the occurrence of such problems, it was necessary to understand the mechanism of the work of the subconscious mind, and pay attention to it and what is going on inside it, and the way the subconscious mind interacts with the inputs and commands that come from the conscious mind, by performing specific exercises, and selecting the information that is given to the subconscious mind, For example: If a young child hears that a job is the most important thing that must be reached, it is possible that the subconscious mind understands this information incorrectly, and thus this child will not think to work independently in the future, or if someone hears about the harms of a certain type of food and that it is the cause For all diseases, he will abstain from it, even if this belief is wrong, and most life situations are measured on that.

The subconscious mind must be given the correct beliefs; To achieve the required results. Characteristics of the subconscious mind The characteristics of the subconscious mind can be summarized as follows: Organizes memories, and stores them all. It stirs one's emotions and feelings. It acts as a motor for the entire body and maintains it. It needs clear steps to follow; To serve the person. It gives the person enough energy to reach the desired goal. Make habits; A person repeating a phrase 6-21 times makes it a habit for a person. It works on the premise that there are many things a person can discover and learn. It works 24 hours a and tracks any information that comes from the conscious mind. Knows what can and cannot work spontaneously; Because it stores memories and situations. It works using the rule of least effort; A person should not force his mind to be creative, but rather try to remain calm and relaxed. Its activity increases with its use. Automatically solve the obstacles facing the person, by giving the optimal solution; To achieve the goals. It provides the person with the necessary patience to learn and reach a goal.